The more I think about it the more I think that I was emailed a link to a recipe for Brownies in a cup, maybe from Mom? Hard to say now since I have now MADE this recipe, tweaked a little bit from this recipe I found when late the other night I NEEDED A BROWNIE RIGHT THEN.

Ahem.
I made the recipe directly from the recipe above (here it is again) and the first one didn't work.

Of course, I WAS making it with gluten free flour and I didn't add any binder like xantham or guar gum that time.
So I followed the recipe and it was a bit runnier that I expected a brownie batter to be, but I gave it a shot.
No go. It was still super runny and uncooked after the first 2 minutes.

I gave it another minute to see if that was all it would need, but alas, it burnt.
And burnt BAD. (I had to soak the mug over night in soapy water to get it out of there)

So I looked online a bit more and noticed another recipe that was EXACTLY the same except that it called for another 2 Tspn of flour so I gave that a try.

I really wanted a brownie.

But it still wasn't the fix, the thing, you know what I am talking about.

When you need a brownie it is not something you can rationalize and make do.
NO! It had to be RIGHT.

So I tried this the next day...

Jana's One Cup GF Chocolate Cacophone
(you like that?)

Into this mug put:

2 tablespoons Vegetable Oil (I used grapeseed, it's what we had)
2 tablespoons Almond Milk (or regular milk, whatever. Juice would probably be good too)
2 grinds of sea salt (the salt REALLY makes a difference here)
4 tablespoons Brown Sugar (I bet brown rice syrup or honey would also work)
4 tablespoons GF flour blend
1/4 teaspoon (or 2 pinches) xantham gum (this made a HUGE difference)
1 tablespoon cocoa
1 tablespoon chocolate chips
1 cap of Vanilla (it's the perfect amount, why measure?)

Mix it up well with a teaspoon and microwave on high for 1 minute and 30 seconds.
(the batter should be a little bit thick, like a regular brownie batter.)
Mine looked like this... 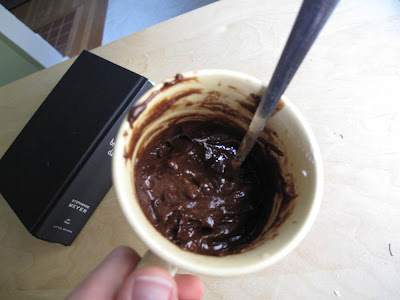 It came out hot and cakey and cooked all the way through. (I bet if you wanted a "molten" effect, you could microwave it for just 1 minute.) 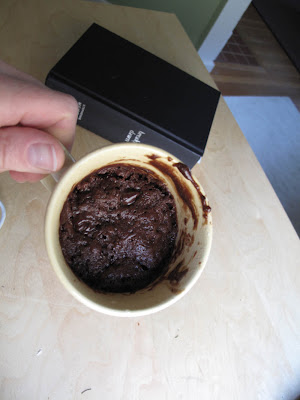 It made just a bit more than I would have liked to eat (for lunch the day after I made one for dessert the night before. Don't judge me) but it was REALLY GOOD.

Much better than the one from the night before.

I would DEFINITELY make this again.

(yes that is "Breaking Dawn" on the table, 4th read through. [Geoff was away for the weekend] I don't care what anyone thinks about that either. I love it like a Teen loves swoopy emo bangs. Or Twighlight, whatevs.)