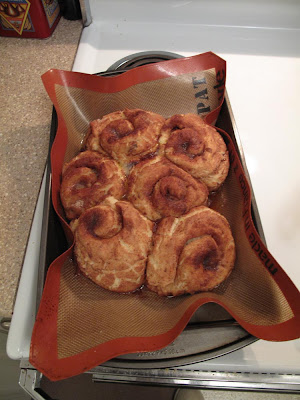 I think we ate them for dinner.

They were a snap too, I just used the Gluten Free Pantry's French Bread/Pizza Dough mix, rolled it on some cinnamon and sugar (with nutmeg and cardamon too), then plopped some butter in the creases and baked.

They were best that day, but not bad the next day.
(I had made up a bowl of drizzly icing to go with them. Dangerous? Yes.)

I think that I prefer them a bit smaller though, these were too big for me. I made them once before in muffin tins and I think I'll do that again next time.

These were however made at a reasonable hour.
So we had time to digest at least.

Why, yes. Cinnamon rolls for dinner is completely acceptable. AS is pumpkin pie slices. 'jus saying